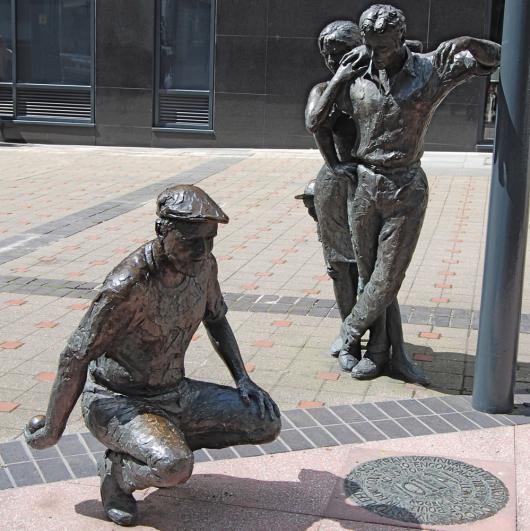 "I'm always wanting to explore new ideas of getting language performed in places you don't expect it, and you certainly don't expect statues to start telling you a story! As a child I had a fantasy that statues were just dying to tell you their stories”

In a quiet paved square in the heart of the city, a Frenchman demonstrates the traditional game of pétanque to an inquisitive Yorkshire family. What do the Yorkshire folk make of it? Are they keen to join in?

The sculpture is officially called 'The Boules Players', and was created by Sowerby Bridge sculptor Roger Burnett. It was officially unveiled by the Lord Mayor of Lille - with which Leeds is twinned - in 2000. It stands next to a petanque terrain, which is often used by local workers for lunchtime tournaments over the summer months.

Boules was invented in 1907 in La Ciotat near Marseilles, and the first tournament was organised in 1910. Popular in France, the game is less familiar in England; however, the rules are posted in Bond Court to help new players (and - theoretically - prevent any disputes). Today, you can play petanque in Leeds with the Leeds Petanque Club and Northern Petanque, who host the Colliers Cup petanque tournament in Bond Court every summer.