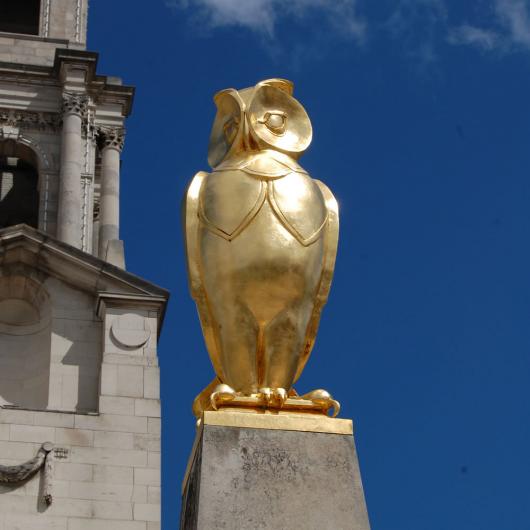 The Golden Owl overlooking Millennium Square is the emblem of Leeds - but how did it get to be so? What has the Owl seen as she watches over the city? Does she ever fly away from her pedestal?

The Leeds coat-of-arms contains three owls - these came from the coat-of-arms of Sir John Saville, the first Alderman of Leeds. Originally from northern France, the Saville family were presented with lands in Yorkshire by William the Conqueror after they supported him during the Battle of Hastings in 1066. Owls are also the symbol of Athena, the Grecian goddess of wisdom.

The four Golden Owl sculptures outside Leeds Civic Hall were created by John Thorp in 2000. Thorp, the last to hold the title of Civic Architect in the UK before his retirement in 2010, has been celebrated for his role in shaping modern Leeds.